We are starting the year by looking at Roald Dahl and all his wonderful work. Roald Dahl would be celebrating his 100th anniversary and in Year 5 we want to take part in all of the celebrations.

In our English lessons we will be creating biographys about Roald Dahl and then looking at one of his stories - 'Enormous Crocodile'. In line with our topic work we will be taking the story that is set in the Amazon rainforest and changing the setting to the hills and streets of India.

Visit to church for heritage weekend.

As part of heritage weekend we visited St Cuthbert's church. We were able to look at the amazing displays and go up to the clock tower. 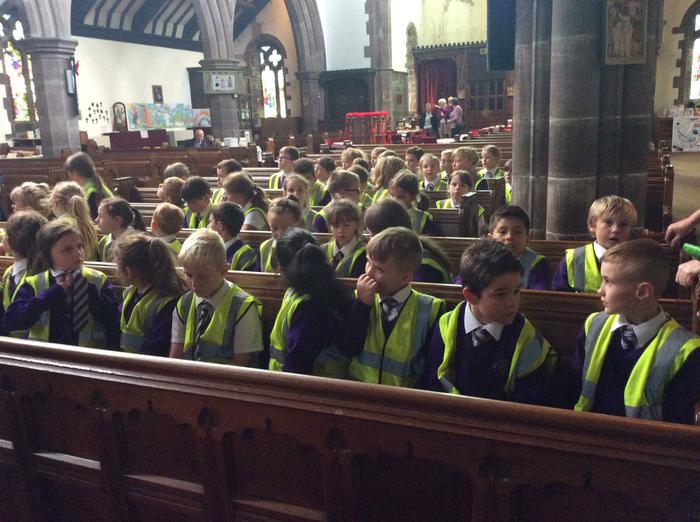 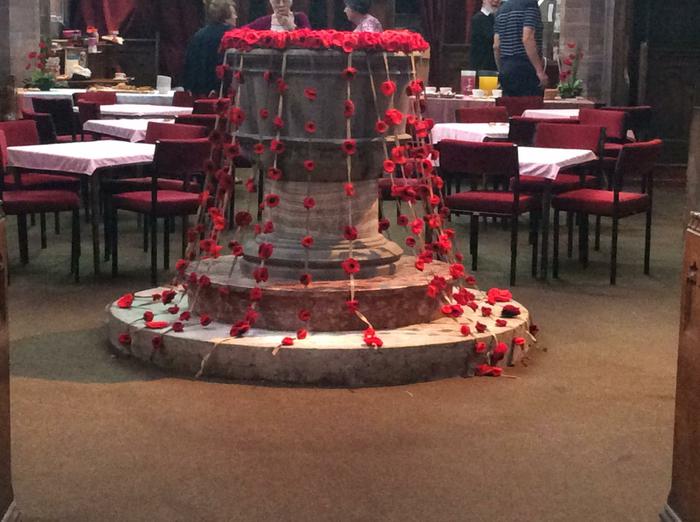 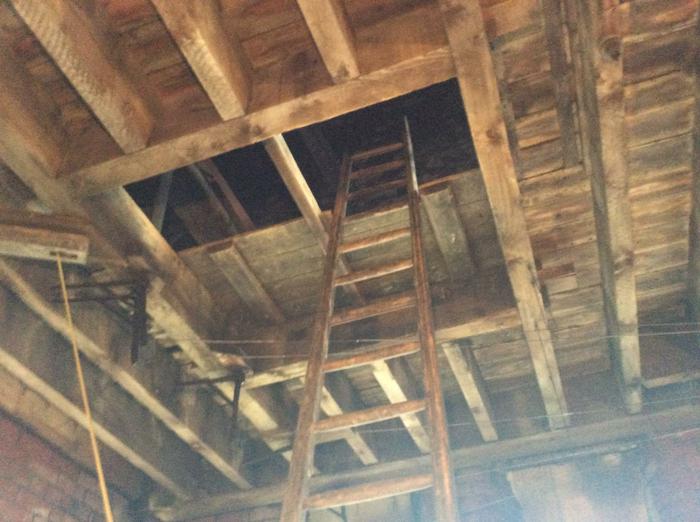 We carried out an investigation into the properties of materials. We tested for transparency, solubility, hardness, absorbency and permeability. 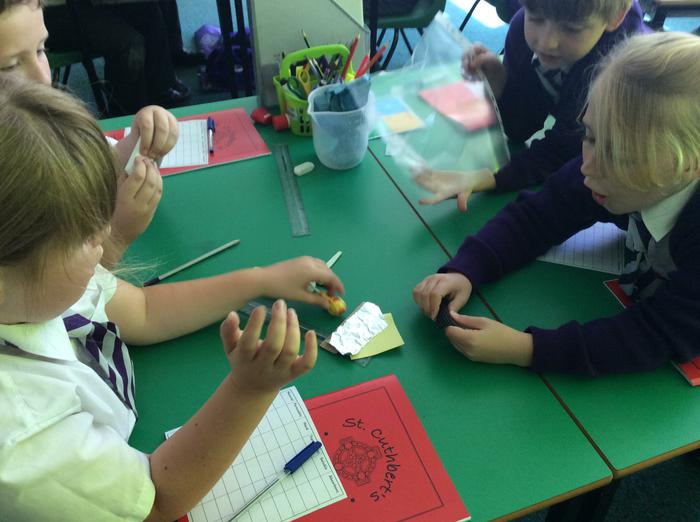 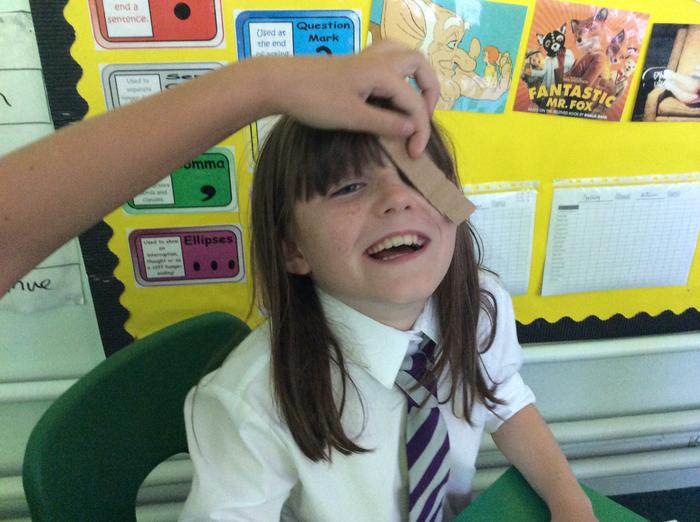 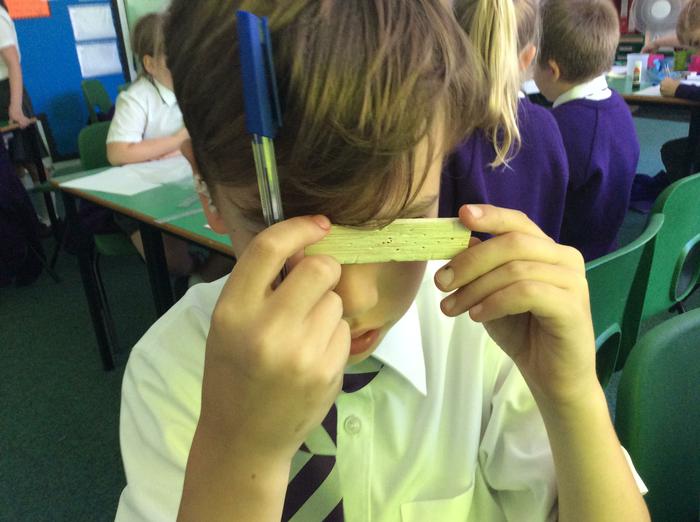 Over the past week we have been learning how to write a strong argument for a debate. We had to decide whether Trunky the elephant was guilty of murder or if he should be celebrated as a hero. After out debate, we decided that Trunky should remain in jail. 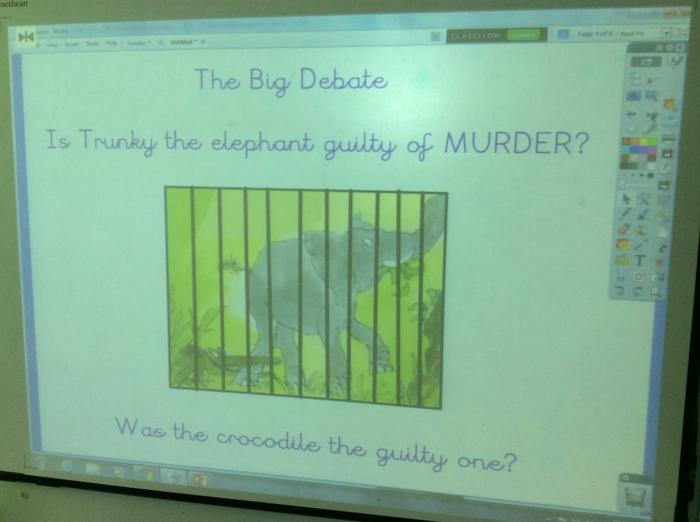 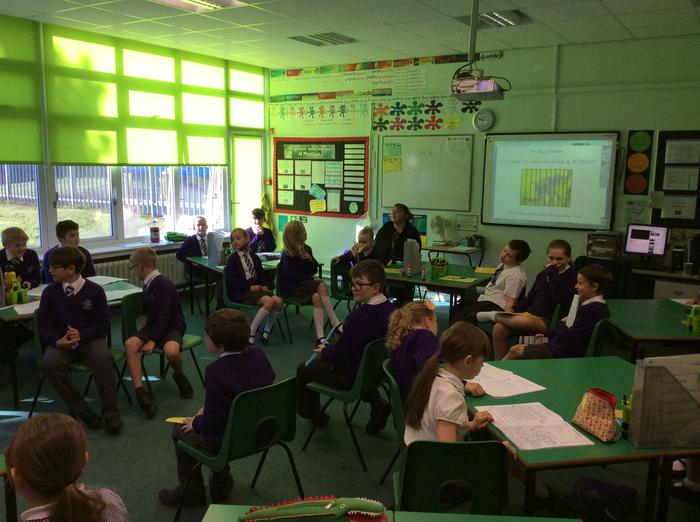 We were lucky today to have a visit from our local police officers. They came to talk to us about staying safe online and what to do if something happened online that made us feel unhappy or confused. We also talked about how important it is to tell an adult if there is anything we are unsure about. Our class designed posters and we have put some on display outside our classroom.

In our maths lessons we have been looking at finding the perimeter, area and volume of shapes. To help us visualise the volume of 3d shapes we had to construct some tricky designs using cubes and calculate their volume.

We have spent time studying a village in India called Chembakolli. We took particular interest in a girl called Chanda and spent time looking at one of her typical days. We talked about how people made money and found that some families were employed to make paper bags. We split ourselves up into families and had a go at working a short shift in a paper bag factory. Using some special calculations we were able to work out how much we would have made in a day. It wasn't enough to buy all of the things we wanted, we learnt a lot from this.

As part of our amazing Indian topic we have had a go at tasting some traditional Indian foods. We found that some Indian food was much more spicy than the food we eat on a day to day basis in England. We enjoyed the flavours in the food and could have eaten much more.

As part of our topic on 'The Alps' we have been working in teams using MODROC to create our very own mountain range. We will be adding colour and effects once the mntains have dried. The teams worked really well together to get the mountains built.

Our mini topic for Lancashire week is 'Blackpool' so we decided to have a walk up to the tower to see if we could see the coast. Unfortunately the weather wasn't the best for taking in the views so our visit to the top didn't last too long. We all had lots of fun exploring in the winter conditions and it is a day we will never forget. Well done everyone! 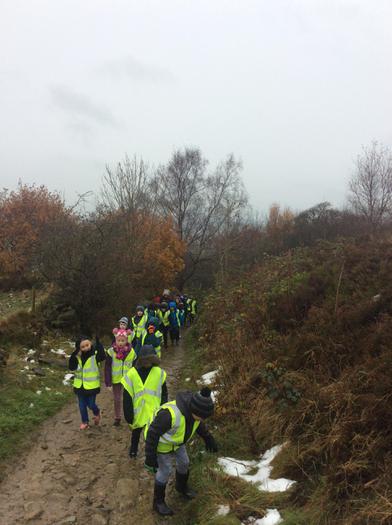 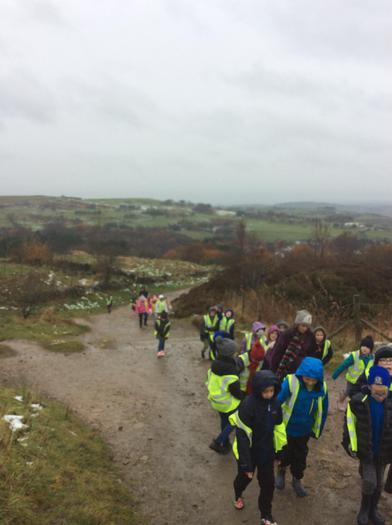 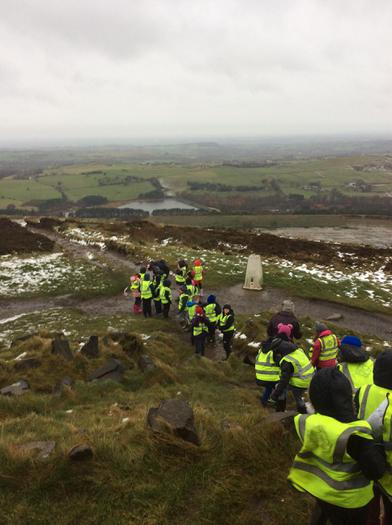 As part of our 'Lancashire Week' celebrations we held an open morning in school. In Year 5 we held a Blackpool Tower building competition using straws and sellotape. All teams gave it their all and the winning tower was very hard to beat. Thank you to all of the parents who came along and for being so competitive (Joshua's Mum) we had a fantastic time.

After successfully creating our models of an alpine mountain range we have moved onto looking at adding colour and detail. We ensured that our mountains had the right colours on them and a good thick layer of snow on the peaks and ski slopes. We added trees that are found in the Alps and some traditionally shaped mountain cabins. 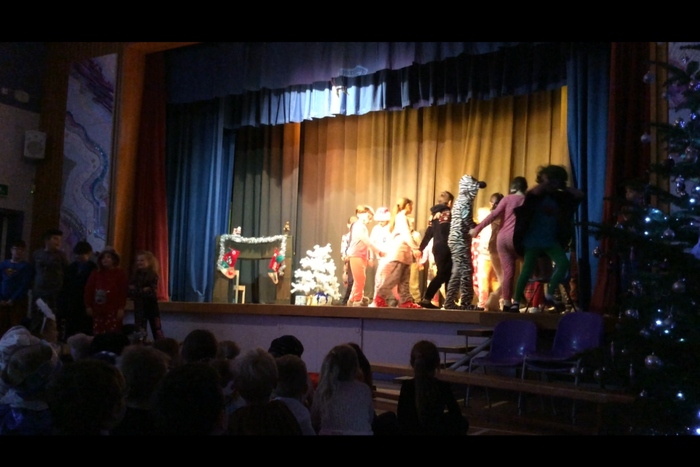 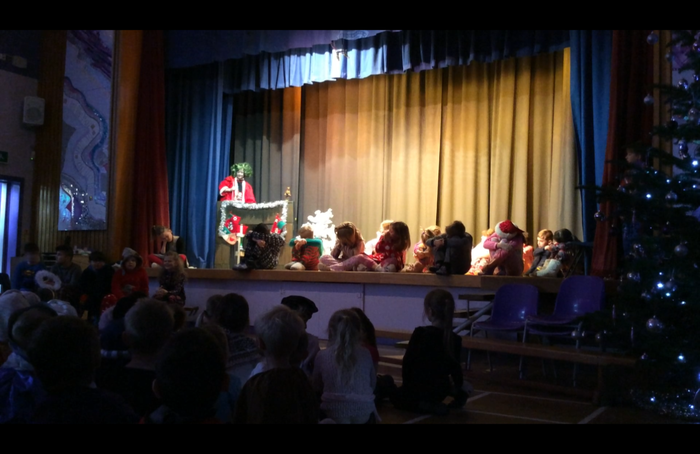 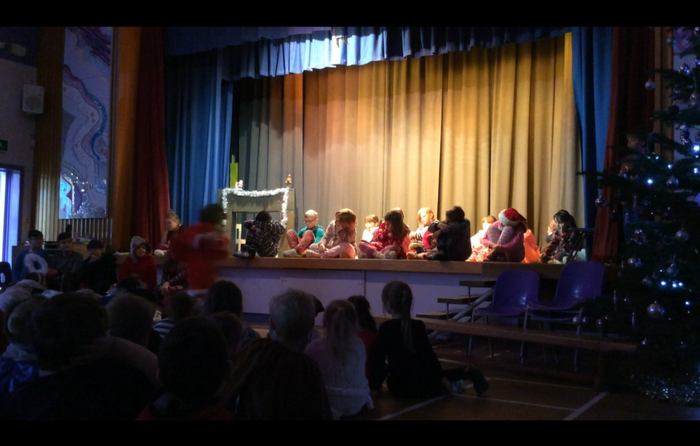 On Wednesday 18th January 2017 we visited the air raid shelter in STockport. The day was split into two parts and we covered lots of exciting WW2 topics throughout the day. In the morning we spent time in a 1940's themed home and learnt about being evacuees. We learnt about the jobs that children were expected to do and also about the constant threat people faced in Britain from bombs and gas attacks.

In the afternoon, we moved over to the air raid shelter which is tunneled underneath the streets of Stockport. We had a great time and learnt about how people managed under the ground for hours at a time. 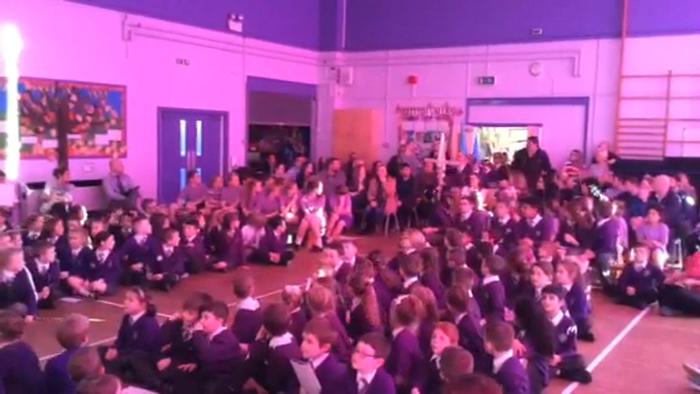 We have been looking at how Christians in Spain celebrate Easter (La Semana Santa). As part of our work we organised our own parade and made a float depicting Jesus, Mary and the three crosses.

As part of our Science topic 'Forces' we have been looking at air resistance. We talked about how it causes friction and its effect on gravity. In our KAGAN groups we were set the challenge of slowing down the fall of an egg to stop it from breaking. Some groups realised that they needed to ensure their design had a big service area to cause more air resistance. 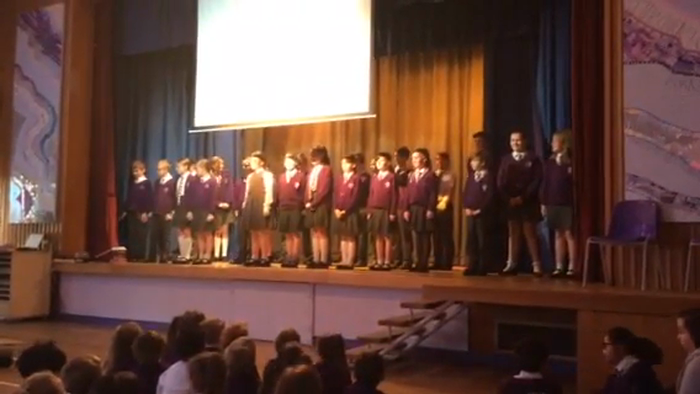 For our whole school 'Passion Play' in Year 5 we looked at the resurrection. After our speakers had told the part of the story about Jesus rising from the tomb we sang this song about Jesus's love for us all.

It was very exciting today as the Lancashire School Library Bus visited our school. Each class were allocated 30 books to collect from the bus. 4 children from our class were chosen at random to go out and collect the books from the bus, they really enjoyed choosing. 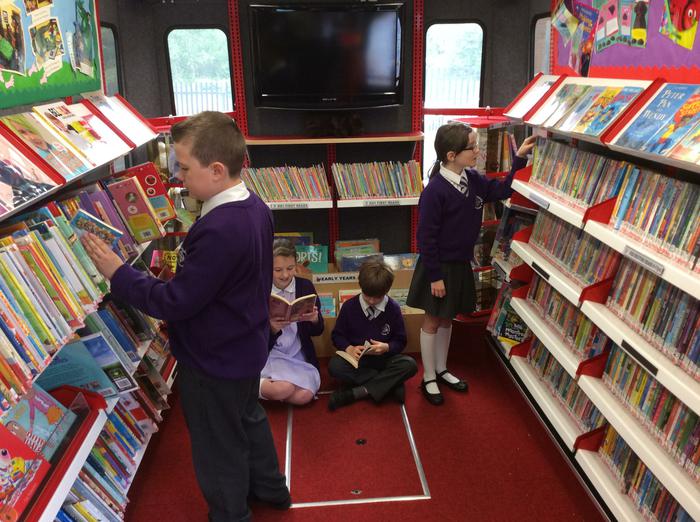 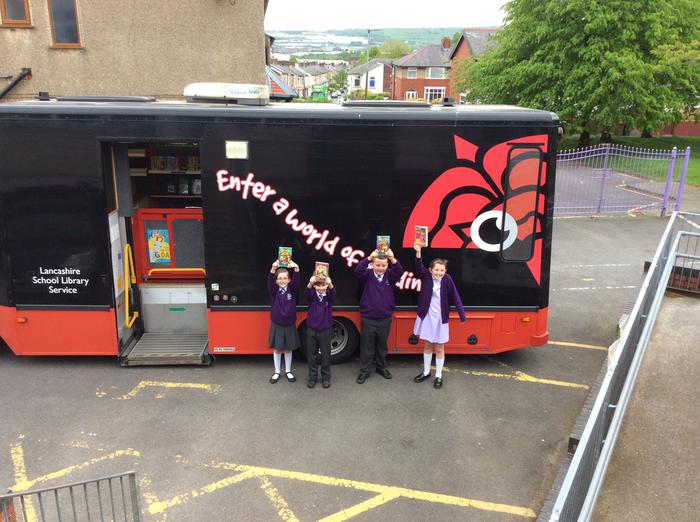 As part of our work on the USA we spent some time looking at the work of Charlie Chaplin. We looked at a biography of his life and had a go at creating some stills of our own.